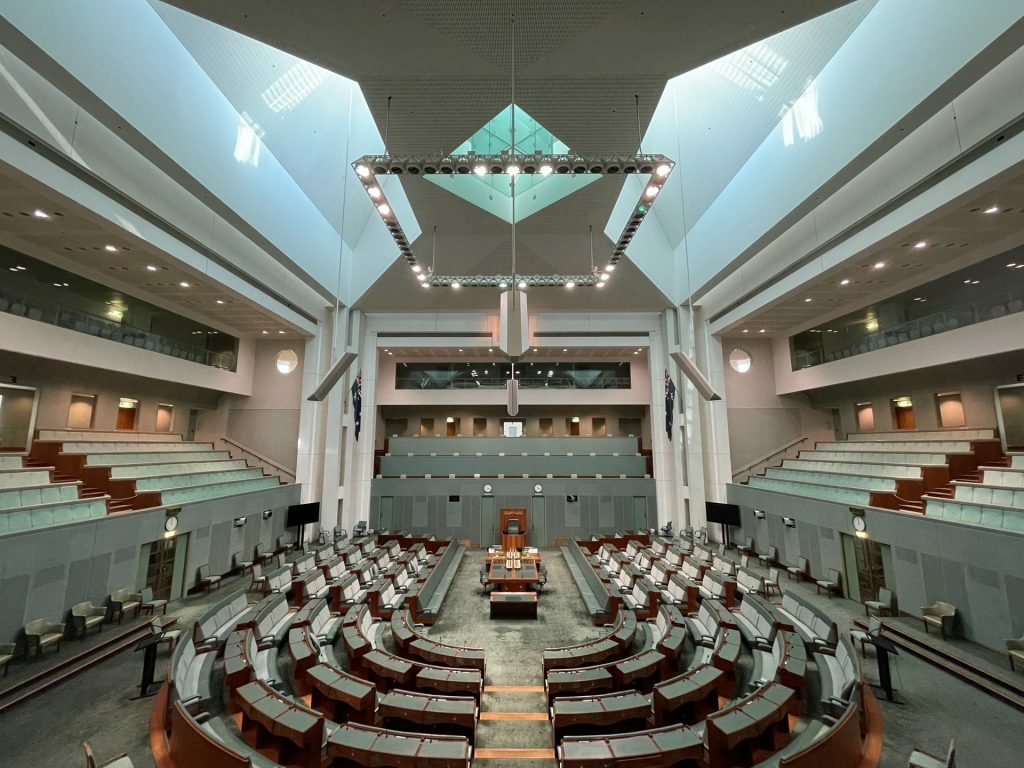 Australia in the run up to the election

On Saturday 21st May, Australians aged 18 years and older will visit schools, church halls and community centres across the nation to vote in the federal parliamentary election to determine who forms government in Canberra for the next three years, and who will be Prime Minister: the incumbent Scott Morrison, or the challenger Anthony Albanese.

Elections in Australia are notable for compulsory voting, a law in place for almost a century, and also for good-humoured pageantry, including the ubiquitous “democracy sausages” – a barbecued sausage on a roll or slice of bread – which are sold to raise money for charity.

But the issues which will determine the election’s outcome are of the upmost seriousness. The voters’ judgement on the government’s economic management – colloquially described as “hip-pocket issues” – will be decisive, particularly in the marginal electorates which are those held by slim margins and which typically swing between the major parties.

The current Liberal-National Coalition government which has been in power since 2013, and led by Mr Morrison since 2018, has endured significant economic turbulence in recent years due to factors including a deteriorating trade relationship with China, the effects of major bushfires, the COVID-19 lockdowns, more recently floods. While Australia is currently experiencing economic growth and relatively low unemployment, the government is projecting significant budget deficits into the future.

But rather than feeling relief or gratitude, voters will be focussing on the next set of challenges and whom they trust to address them. Australia is suffering the inflationary effects of both the massive fiscal stimulus during COVID-19 and the same supply chain disruptions which are plaguing other advanced economies. The current inflation rate of 5.1% prompted the Reserve Bank to raise interest rates by 0.25% to 0.35% this week – an exceedingly rare move during an election campaign – and they also indicated rates could continue to rise to 2.5% in the medium term. This is cause for anxiety for many voters, as Australia has high household debt (mainly home loans) and has experienced dramatic house price appreciation in recent years.

Outside the government’s control, but no less a concern, are the looming economic effects of China’s COVID-zero policies and ongoing lockdowns in major cities. As Australia’s largest two-way trading partner, a slowdown in Chinese economic growth will necessarily affect key energy and mining exports.

Both Mr Morrison and Mr Albanese made competing economic speeches this week, with the Prime Minister vowing to help the establishment of 400,000 new small businesses across the next five years, and the Labor Party leader promising a new phase of economic reform to lift Australia’s growth and create the conditions for rising wages. Despite the spectre of inflation and the fiscal deficit, plenty of additional pledges and promises can be anticipated from both parties across the final weeks of the campaign.

Another surprising feature of this election campaign has been the prominence of foreign affairs, a rarity in this country. The Russian invasion of Ukraine has seen the government donate money and arms to Kiev, including the Bushmaster infantry vehicles, all of which have received enthusiastic bipartisan support.

But more controversially, and far closer to home, Prime Minister Manasseh Sogavare of the neighbouring Solomon Islands recently signed a security agreement with China which raised the possibility of a permanent Chinese military presence in that country. This comes despite longstanding security arrangements with Australia which have seen several multi-billion-dollar deployments of police and defence personnel during the last two decades – as recently as last year – to restore law and order after bouts of civil unrest. It also casts a shadow over Mr Morrison’s much vaunted Pacific Step-Up policy, which expressed his notion of a “Pacific family” in which Australia remained the “security partner of choice” and responsive to aid and infrastructure needs in the region.

The pact was signed despite the assiduous efforts of a series of Australian intelligence chiefs, diplomats and the Minister for the Pacific, Zed Seselja, who visited Mr Sogavare in the capital Honiara in recent months. Mr Sogavare insisted his country was free to develop security relationships with any nation it chose but gave repeated assurances that there would be no Chinese military base, long-term presence, or power projection capability located in his country. US National Security Council Coordinator for the Indo-Pacific Kurt Campbell, who visited Honiara after the pact’s signing, made clear that any breach of those assurances would provoke “significant concerns” and that the US would “respond accordingly”. Mr Morrison went on to describe the assurances as a “red line” for Australia.

Mr Sogavare, who oversaw his nation’s switch from the diplomatic recognition of Taiwan to the PRC in 2019, has gone on to criticise Australia and the West in his parliament this week saying among other things that talk of red lines was tantamount to threatening “invasion”. He has also complained about the double standard of not being consulted before Australia announced the AUKUS deal with the United States and United Kingdom last year to deliver nuclear-propelled submarines to Australia and cooperate on advanced defence technologies.

The affair has seen various members of the government invoke the Cuban Missile Crisis and imply that pact’s timing during an election amounted to political interference from Beijing. In response Labour’s shadow foreign affairs minister Penny Wong delivered scathing description of the issue as “Australia’s biggest foreign policy blunder since World War II”. A recent poll showed 72 per cent of voters to were “concerned” or “very concerned” about the agreement.

The issue has complicated the government’s desire to promote its national security credentials – the so-called “khaki election” strategy, named for the colour of army camouflage – which has also seen the Prime Minister cast regular aspersions on Mr Albanese’s willingness to stand up to China.

But many of Mr Morrison’s defence and security initiatives have proven easier to announce than to deliver. For example, the AUKUS pact to deliver nuclear-power submarines was announced with great fanfare in 2021, but is unlikely to result in new boats in the water until the late 2030s, leaving Australia with six small conventionally powered submarines which were designed last century and commissioned between 1996-2003. It will now be left to the next government to make substantive decisions about the boat design, where it will be built and where they will be based. Similarly, the development of a sovereign missile manufacturing capability was announced two years ago, and only recently have two US defence contractors been named as the industry partners.

Climate Change remains a key battleground in this election, as it has been on each occasion since at least 2007. While Australia has a mixed international reputation for its position on combating climate change, it reflects a genuine political cleavage in the Australian electorate which sees political conservatives, climate sceptics and blue-collar workers (particularly in the mining industry) allied against younger, more progressive and inner-city voters who want faster action on climate change. It must be said that despite the prominence of climate change in the public debate, rarely have voters ever chosen a party proposing to increase their cost of living, and much less so in the marginal electorates which will decide the election.

This major party focus on winning marginal seats, and their somewhat undifferentiated positions, has been responsible for the dramatic rise during this campaign of the “teal” candidates – a shade of liberal “blue” mixed with environmental “green” – which comprises more than 20 independents who are running in Liberal-held seats often in inner-city and affluent suburban areas. They are funded by the Climate 200 organisation which is promoting issues including combatting climate change, integrity, and gender equality, and hoping to gain the balance of power in the lower house. They have also received rhetorical support from Mr Morrison’s predecessor, former prime minister Malcolm Turnbull. It has raised the possibility of a hung parliament, where no major party commands a clear majority of seats in the lower house after the election, the support of independents becomes crucial to forming government, and significant concessions are generally required to their policy preferences. (Mr Morrison has described this scenario as “chaos”.)

Despite Mr Morrison’s modest tenure as Prime Minister at just under four years, he carries a particularly heavy burden in leading a government which is now approaching a decade in power. It is surpassingly rare for Australian voters to return a government for a fourth consecutive term, a fact reflected in the polls.  Two-party preferred polling has been indicating greater support for the Labor Opposition since June last year, most recently a 53%-47% margin, which if replicated on election day would see a loss of up to 10 seats for the Coalition and the Labor Party swept to into government. Betting odds at all the major agencies also indicate the likelihood of a Labor win.